February 03, 2015
Upstack refers to the pieces dropped onto the playfield. Upstacking refers to "stacking up" pieces to score larger line clears, usually on the bottommost rows of the stack.
Aim to keep the stack open to multiple placement choices, since you won't always get the right piece. Pieces not fitting result in holes and gaps. When you can't clear lines because of the holes, you must stack even higher. This ultimately leads to topping out. Build surfaces that will maintain good spots for any piece, and even any next piece after receiving any piece.
Note: I have ignored holding and soft dropping for this article. Their use can make some ideas difficult to explain.
Contents

By having bumps and flat areas, you can accommodate all pieces. The O-piece below needs a flat surface.
✕

Creating options for S- and Z-pieces

The S- and Z-pieces need bumps and notches.

Keep a spot for both the S- and Z-pieces.

Aim for smooth surfaces with only enough bumps to allow for potential S- and Z-pieces.

Stack so that lower areas "catch up" to higher areas.

Use previews to find the most flattening outcome. 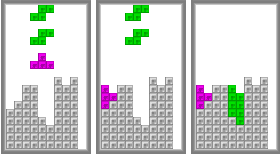 Avoid this jagged shape against the side.

Make sure you have a T-, Z-, or I-piece coming soon. The shape effectively blocks three columns in their absence.

The jagged shape is usually not worse than towers, wells, or piece dependencies. But exercise caution. Unless you resolve the shape, you risk creating a 3-high edge.

The Z-piece variation creates an uncomfortably bumpy surface right up against the edge.

Using another Z-piece only perpetuates the shape. Due to its self-replicating nature, it is similar to a T- or I-piece dependency.

Stacking next to it can bring us back to the initial problem again.

Resolve the shape early instead of wasting the I- or T-piece elsewhere.

If you can't resolve the shape, open it up by creating flatness to the side.

Notches in the center create more choices than those against the sides.

Avoid the "side notch" when you can.

Well-connected surfaces do the best job of accepting a variety of pieces. Towers and wells result in islands. You lose placements around the edges of the islands.

Deep wells also create islands and cause you to depend on certain pieces.

These islands have a slippery slope effect. Poor placement options lead to worse ones.

If you must create a tower or well, keep it off to side.

Notice the I-piece in the below example now connects to the center island and creates more total placement options as a result.

Note: as the above example is less intuitive, here's a closer look.

When forced into 2-deep surfaces, move them to the sides.

In the below example, the Z-piece connects the left well to the left island. This creates a new option for the L-piece.

With ten columns, you can measure the difference in heights between their nine intersections. Low values suggests more connectivity.

Bringing high edges to the sides of the surface disconnects only one direction of the raised column. A high surface in the middle disconnects from both directions. Raise up surfaces against the side wall instead of in the middle.

Below, placing the I-piece on the right blocks the S-piece.

The S- and Z-pieces are unique in that you cannot place them on a completely flat surface without creating a gap.

The 2-wide 1-deep well is one of the stablest surfaces for S- and Z-pieces. It conserves future choices.

T-piece indentations cater well to both S- and Z-pieces. Pay attention to the order of which the pieces come to prevent overly raised surfaces.

Maintain spots for both S- and Z-pieces.

Ideally we will have spots for both horizontal choices.

Having choices for both S- and Z-pieces is usually more important than avoiding dependencies.

Avoid 2-high surfaces by fitting O-pieces next to bumps.

But they sometimes make sense when you see the O-piece coming.

Avoid depending on an L- or J-piece.
✕

If you must, then prefer having a choice of either.

In the below example, surface connectivity is more important than creating both L- and J-piece options. This is often true when L- and/or J-piece dependencies hug the sides.

Below, the first example allows for an L-piece option, but the second example is more stable overall. It gives more choices to place intermediate pieces while waiting for the J-piece.

If you need to create a 2-deep well, put it near side.

Prioritize wells in the center opposed to ones lining the sides.

As always, choose the option that secures the stablest outcome.

When the right piece is coming, a 2-deep well is no big deal.

When forced into an I-piece dependency, put it to the side.

Artificial wells give the I-piece a lower spot to sit, promoting flatness.

Avoid using an I-piece on the surface when you can clear it just as easily. You never know when you will get your next one. But when the stack is not stable, use the I-piece to fix it. Do this when there is no risk of topping out. 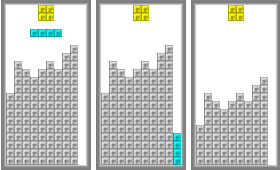 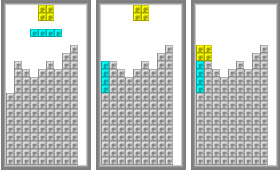 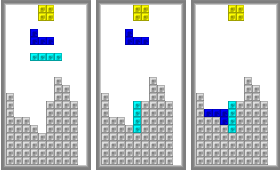 Create the correct "steps" needed for either of the S- or Z-pieces.

Raise up single-cell dips on the edges.

T-pieces have a unique property. When checkered, the pieces have two dark and two light squares. The T-piece is the exception, and contains an odd number.

A Perfect Clear Tetris is only possible with an even number of T-pieces, or none at all.

Below, two T-pieces sit directly next to one another. After checkering them, they create balanced parity of four gray and four purple cells.

Placing them where their center is an even number of cells apart results in six gray and two purple cells. This is the "castle top" surface. Seasoned players intuitively maintain balanced parity because they know this surface causes problems.

Bumpiness is the hallmark of unbalanced parity.

It stands to reason that only the T-piece is able to resolve certain shapes. In the below example, there are more dark checkers than light ones.

Any combination of pieces lacking the T-piece will fail to fully resolve the bumpiness.

You can also flip parity with line clears. A single line clear contains/erases 5 dark cells and 5 light squares. Say that you have 3 dark cells and 1 light cell above the line and 3 light and 1 dark below the line. Clearing the line will bring the top cells down one row, flipping their dark/light status. This results in 6 light and 2 dark cells total, changing the parity balance.

There are two reasons why this happens:

As shown throughout this article, there are many different "problem" patterns. For example,
As a beginner, I would greedily avoid these problems at the first opportunity. By avoiding one "problem pattern," another would pop up. You can't just put a band-aid on some underlying, more deeply-rooted problems

Instead, consider taking the "less bad" pattern now opposed to waiting for the inevitable and worse pattern. This requires getting a sense of when there is a problem with the stack that has not yet emerged in an obvious way. You may need to take a temporary hole, or more often than not, allow a J- or L-piece dependency off to the side of the surface in order to escape a worse fate down the line.
Diagrams made with tage.

Popular posts from this blog

Downstacking refers uncovering and filling holes in order to gain access to the bottom rows of the stack. Downstacking is a challenging skill to master and rich with depth. Inefficient downstacking is often the Achilles' heel of newer players.  The primary goal is to lower your surface height. Doing so prevents you from topping out. Use as few pieces per garbage row as possible. Note: this article does not take into account details such as line clear delay and attacking power. Those matter when deciding whether or not you should try to group line clears together while downstacking. Contents Covering Holes Examples Managing Upstack Residue Lying Low Clearing Lines Finding Line Clears Platform Stacking Prioritizing Line Clears Problematic Patterns The Jagged Corner Crowding Covering Holes The location of each hole tells you how to place pieces above them. The higher the hole, the more important
Read more

Some attacks send more than others, but it's not so simple as to say "the more you send, the better." Evaluating performance Suppose that you had a number of game replays in front of you. You can't watch the games, and you don't know who won. You do have various data such as how much garbage each player sent, game length, how many pieces used, etc. How could you use this data to best predict who won? To simplify this problem, assume that when the game ends, only garbage remains. One commonplace statistic is "Tetrominos Per Minute" (TPM).  It simply measures playing speed. Would the faster player more likely win? What if they play thoughtlessly and wastefully? Maybe they clear too many Singles. A slower player, who makes better use of their pieces, can still win. Over the years people paid more attention to "Attack Per Minute" (APM). It takes skill to play quickly, but it also takes skill to convert those pieces into attacks. APM correlat
Read more